From fancy parties to game day, pigs in a blanket (with honey mustard dipping sauce) is never a bad idea.

While a rare occurrence, you can find me on game night at a friend’s living room or in a stadium rooting for the home team. But make no mistake about my good-humored intentions—I’m here for the food.

When the 2019 World Series featured my sister and my brother-in-law’s favorite team, we planned on getting together for game three and I knew exactly what I was bringing. Something I’ve never made, hardly ever eaten and had been looking for an excuse to make since a few days after Anthony Bourdain’s death. (Stick with me, I promise this ties in.)

After he died, I pulled out his cookbook Appetites and spent some time with him via his stories, recipes, and so-him photography. Then, I came to a diversion in the Party chapter where he talked about pigs in blankets and felt like I could point to this passage as a way to define the man we lost and explain to someone who had never heard of him why he was so loved. He cared about food. He cared about delicious food. He took his work seriously and he invested time in telling the stories of others in his field. But he wasn’t a sob about food.

If you don’t have the book handy a quick summary of what he said: no matter how grand party your spread is, how fancy the ingredients are, or how perfectly you pulled off a complicated, highbrow dish, people fucking love pigs in blankets. They will swarm to them, eat them and love them. “Always keep some (commercially made freezer-case-sourced) pigs in fucking blankets in your freezer.”

I was struck by his humor, and moreover, the humility that he displayed when talking about how much people love pigs in blankets. This from a chef who just told me how to make shrimp bisque and that I should try to impress my guests with Poulet "en vessie": hommage à La Mère Brazier.

He knew what we are all ultimately going for… a room full of our friends and family happily gathered over good food.

So, back to game three of the World Series… I had store-bought puff pastry in the freezer that I chucked into my purse as I headed out the door, I grabbed some sausages on the way to my sister’s, and by the time we were getting settled into the third inning, we had what Anthony said we would… and empty plate and people asking if there were more.

You could, of course, do what Anthony suggests and buy these pre-made. You could do what I did the first time and pair pre-made puff pastry with sausage. Or you can try what I did below which is the most homemade version of the three. While we devoured the puff pastry version, it did as promised and puffed up making these HUGE bites. What I was on the hunt for was something just a buttery and flaky but without so much puff. I found the answer in a galette dough recipe from the one and only Deb Perelman.

(enough for one 12 oz package of sausage)

Prep by cutting the butter into small pieces and then returning it to the fridge.

In a small bowl, or better yet, a glass measuring cup, whisk together the yogurt, vinegar, and water and set in the freezer while you prep the rest of the ingredients.

Combine the flour and salt in a medium to large bowl. Blend cold butter pieces into the flour with your fingers or a pastry blender until the texture is like cornmeal.

Stir in yogurt mixture with a spatula or spoon until a dough forms. You might need to knead it a bit with a little bit of extra flour. Work into a ball and then flatten into a fat rectangle with your hands. Take care not to overwork the dough; we’ll roll it to full size later.

Cover with plastic wrap or bees wrap and refrigerate for 1 hour or up to a couple of days.

Line a baking sheet with parchment paper and preheat the oven to 400°.

On a floured, clean work surface, roll out the dough. You’ll want it as wide as your sausages and long enough for each one to but completely rolled up with enough overlap at the seam to seal. A little overhang is just fine (and tasty). Just pinch it together like the ends of a wrapped candy.

Place one sausage at the end of dough and roll it tightly in the dough until it’s fully covered and you have a bit of overlap. With a sharp knife, cut it from the rest of the dough rectangle. Press to seal the seam closed and place seam side down on your prepared baking sheet. Repeat with the rest of the sausages, spacing them at least an inch apart. Brush the tops and sides with the egg wash, if using.

Bake for 35 - 40 minutes or until the pastry is golden. Let cool for 5 minutes then cut into coins or larger pieces.

Best hot or room temp if they last long enough.

You can easily double the recipe. The dough can be frozen. 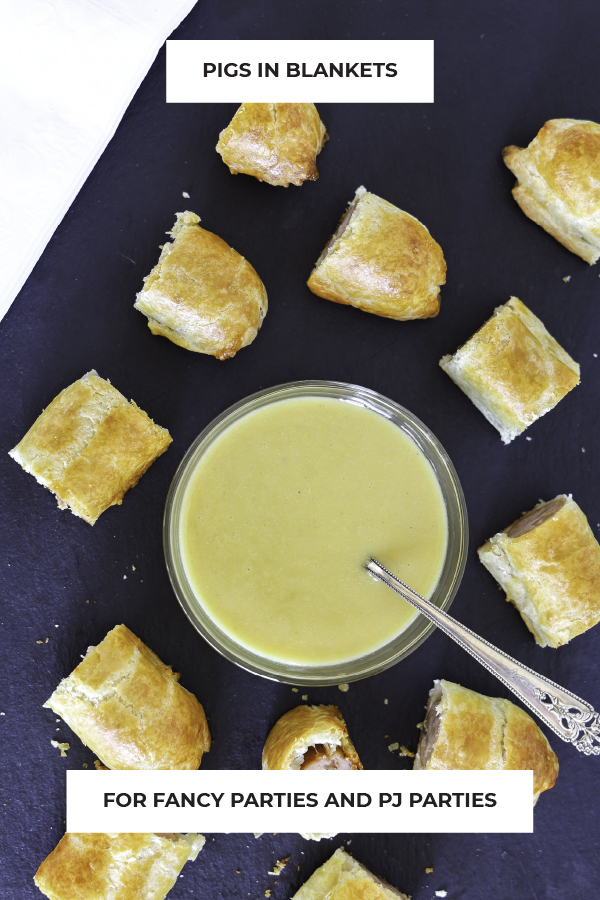