On Friday we cut out of work early (which these days means on time) and caught the last of the summer sunshine on the deck with this corn & tomato salsa and margaritas.

It's an easy dish that can be pulled together quickly and riffed as the seasons change (add in grilled peaches or pineapple, perhaps?).

Two recipes inspired this one. The first from a cooking show that I must have seen a million years ago, two moves ago, on the other side of the country when we still had cable. The second is from a charming cookbook by Janet Fletcher called Fresh from the Farmers’ Market. My copy of Janet’s book is sun faded and it was the book that taught me how to store fresh fruits and veggies. (Until moving to California and getting this book I had no idea that tomatoes are stored on the counter, never in the fridge.) It’s more commonplace now to hear from cookbook authors how best to care for your ingredients but this was my introduction to it.

In her recipe, the corn/tomato/onions are pulled together as a salad, use shallots and white wine vinegar instead of red onions and red wine vinegar, and completely skips the grilling steps.

Here’s what I gathered:

What these similar recipes taught me is that corn and tomatoes with a hit of acid are a win and have plenty of chances to shine at my, and I hope at your, table.

Here’s my take on it.

Oh, and margaritas are invited to the party.

Grill four or so ears of corn, turning every few minutes, and allowing for some darker spots. No need to oil the corn first. Set aside to cool.

‍While you're waiting for them to cool enough to cut the kernels from the cob, toss a cup of diced red onion with red wine vinegar (I use a measuring cup and pour the vinegar to just below the very top of the onions and spoon them around every few minutes so they all get a chance in the vinegar bath). Let them mellow out for a bit.

Dice the tomatoes, any kind you like, if they are small like cherry tomatoes, just halve them.

Cut the kernels from the cob.

Toss the corn, tomatoes (and any juice), and onions fished out from most of the vinegar (read: don't pour it all in yet!) in a bowl. Taste.

Stir in salt and pepper and torn or julienned basil. Taste. Adjust with more salt, reserved vinegar, and olive oil (which you might not need; taste and then adjust).

Serve with chips as a salsa or as a salad. 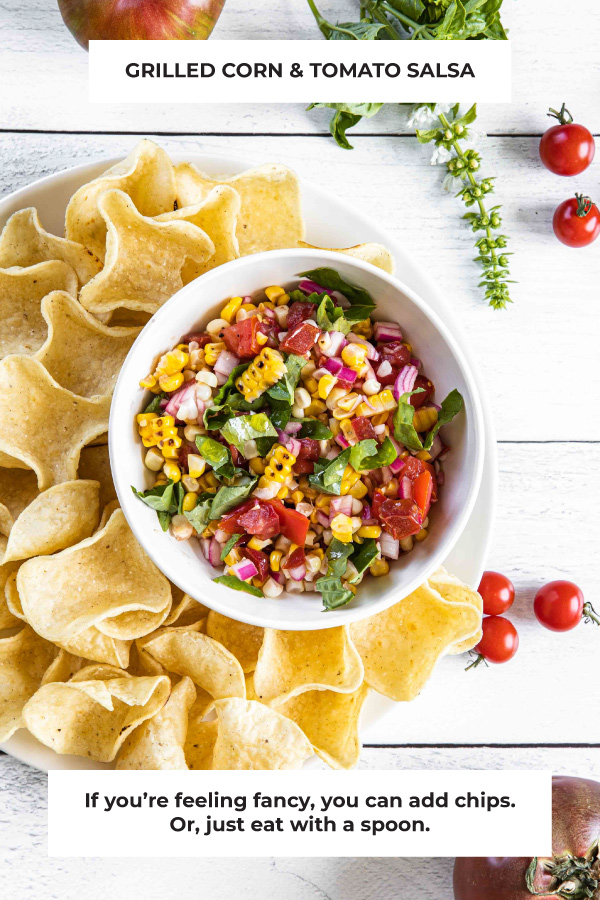