One thing I’ve learned in cooking but also in life is if you hint at your intentions to do something and someone asks a pointed follow-up question be sure to stop talking as soon as possible to hear what they are really saying.

For example, while at lunch last week with my friend Jesse, who works at the world's largest "fruit" company, I mentioned that I had gone to an apple farm and planned to make an apple cake. He immediately asked (with an idea in his eyes) if I had a recipe picked out yet. I did but I asked if he had an apple cake recipe and in exchange for my question I got not only one of the best apple cake recipes I’ve ever tried but also learned about the origin recipe developer, cookbook author and baker, Judy Rosenberg.

Her book is delightfully titled Rosie's Bakery All-Butter, Fresh Cream, Sugar-Packed, No-Holds-Barred Baking Book. And wow, does she deliver on her promises!

The apple cake bakes up tall but is tender and full of apples (but not too full of them). It’s spongy and sweet and keeps well for days. Meaning, you can make it for dessert tonight and have coffee and cake for breakfast the rest of the week. The topping and adds a bit of cinnamon sugar crunch that is so satisfying on its own that I found it hard not to sneak flakey pieces off the top as I served it.

The original recipe calls for ¼ cup more sugar (and only white sugar) but I found it just a wee bit too sweet. I also subbed out some of the white sugar for brown because I wanted to up that molasses/butterscotch flavor.

You can use any kind of apples you like. I went with a mix of Mutsu and Braeburns. I also didn’t bother to peel them and didn’t once notice the skin, though Judy’s recipe calls for peeling them.

Preheat the oven to 350°. Butter and sugar a springform pan.

Whisk together flour, cinnamon, baking soda, and salt in a medium bowl and set aside.

In a stand mixer, cream the butter, oil, sugars, and vanilla on medium speed until combined and a bit fluffy, about two minutes. Scrape the bowl as needed.

Lower to medium-low speed and add the eggs one at a time, allowing each to be fully combined before adding the next. Scape the bowl as needed.

Stop the mixer, add half the dry mixture, and then mix at low speed until combined, about 15 seconds. Stop again and add the rest of the dry mixture. (I’ve seen people do this in movies without stopping the mixer so feel free if you are unlike me and that doesn’t result in losing half the dry mix to the air, counter, etc.)

With a spatula, fold in the apples.

Spoon the batter into the pan, smooth the top a bit, and sprinkle with topping over the top.

Bake until the top is firm, golden, and a tester comes out clean (be careful not to be fooled by a buried apple), about 1 hour and 5 minutes.

You could follow her recipe and omit the dark brown sugar and up the regular sugar to 2 cups / 400 grams (total). 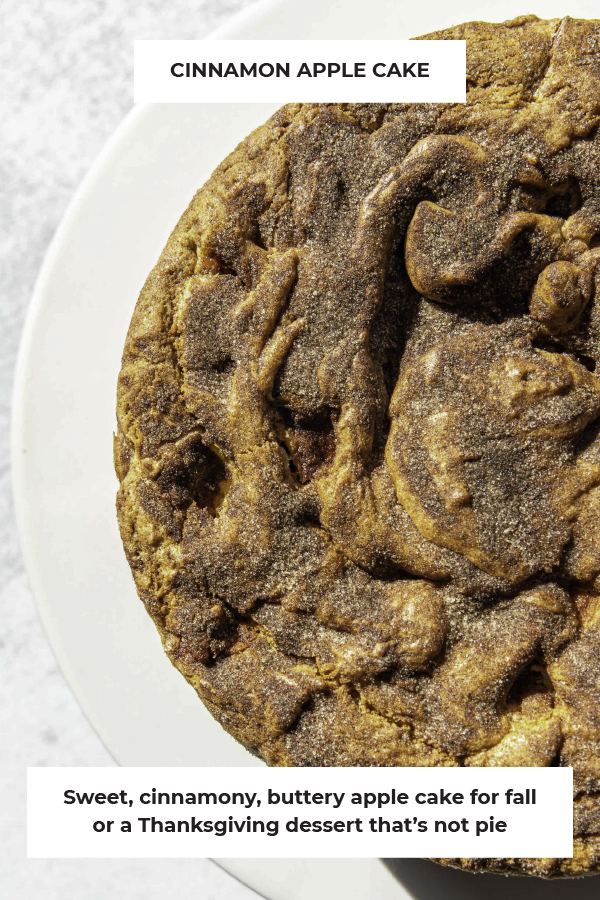